The Aimpoint® Acro C-2 was chosen for its extreme durability, its low weight, and its capability to be mounted low on the barrel. The extended battery lifetime is another reason why the Acro C-2 won the award. 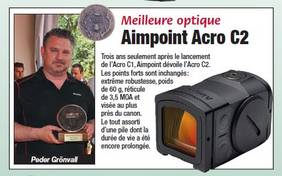 The readers of the magazines "Armes de Chasse & Connaissance de la chasse" have crowned the Acro C-2 as the best product of 2022 in the category: OPTICS

Peder Grönvall from Aimpoint was present at the Game Fair Exhibition which took place in June in Lamotte-Beuvron, France, where he received the award together with our French distributor, the company Humbert/Beretta France.