Aimpoint has been awarded a contract from the Berlin Police to supply nearly 3800 Aimpoint® CompM4 red dot sights.

Aimpoint won the contract in an open competition. 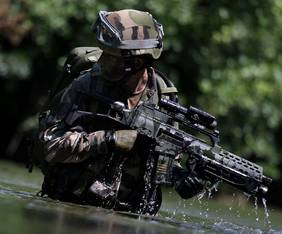 “We are proud that the Berlin Police has chosen the Aimpoint® CompM4 in their development program” says Lennart Ljungfelt, President of Aimpoint AB and continues; “The CompM4 is a very much appreciated product by the operators for its reliability and ease of use. Therefore, we know that our new customer will be satisfied with its choice”.

The Aimpoint® CompM4 sights have been in operation with many military organisations worldwide for several years. They have become a standard product for NATO countries. It is a user-friendly, soldier-tested and combat proven sight that increases the effectiveness of the individual soldier. The CompM4 sight relies on a single AA battery to provide a 'constant on' of up to 80,000 hours or 8 years.

Currently, more than 1,500,000 Aimpoint® sights are already in use by Law Enforcement and Military Forces around the world. The Berlin Police chose the Aimpoint® products because they will increase the speed and shooting precision of their police officers. The sights will be mounted primarily on H&K MP5 carbine. The start of the delivery will take place later this year.